Why cleaning DPFs and converters?​

Over the recent years, focus on exhaust systems in modern cars has increased.

Basically a DPF is not a component that needs much maintenance, as long as the car has a driving cycle, where the temperature in the filter reaches the minimum required to regenerate the filter, “burning” the particles turning them into ashes.

​Should the temperature fail to reach the level required, the ECU of the car can administer an injection of diesel into the system, ignite it and thereby raise the temperature in order to start the regeneration.

​The filter can also be equipped with one or several glow plugs, raising the temperature if necessary.

​Finally the system can have different types of additive liquid injected to start the regeneration process.

​When a diesel car with a DPF comes into a workshop, having problems related to the exhaust system, the mechanic has different options:

​​In 2003, when the rules of the EU, for limiting the amount of sod in the exhaust gas were enforced, Flemming Nøhr saw the opportunity for generating a new line of business, founding MT Filter Service, which is now one of the leading companies in the field of cleaning and repairing DPFs for trucks and busses.

​Most of the workshops dealing with trucks and busses are aware, that DPFs can be cleaned or even repaired, if the canning or the monolith is damaged.

​However, not all workshops repairing small cars are aware of this fact, as the amount of companies providing this service, is very limited.

​As mentioned earlier, even a well functioning DPF generates ashes.​

This ash is accumulated in the DPF and will eventually, reduce the airflow, causing increased back pressure and higher fuel consumption, ending up with the ECU reporting a faulty system.

​Having the DPF replaced instead of cleaning the monolith, is a waste of money and resources, and this is why MT Filter Service is now offering the cleaning and repairing of DPFs for light vehicles.

​The major difference between the cleaning of DPFs for heavy trucks and busses and the cleaning of those for light vehicles is, that the light ones – until now – have had to be cut open, as they are not originally made for servicing. Afterwards they are put together by welding.

As the demand for cleaning DPFs for light vehicles is increasing, MT Filter Service has now invested in a new invented, Italian produced Flask Cleaner, enabling us to clean the light vehicle DPFs without cutting them open, and the process being much faster. 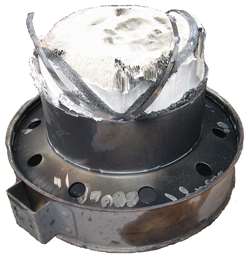 Get a FREE offer here